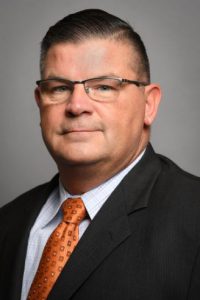 Mike Hellstrom, Jr. serves as Vice President and Eastern Regional Manager of the Laborers’ International Union of North America (LIUNA). He succeeds Raymond M. Pocino who retired in October 2022 after 25 years in the position. LIUNA’s Eastern Region represents more than 45,000 unionized workers in New York City, Long Island, New Jersey, Delaware, and Puerto Rico and is known for its vibrant organizing and political action programs as well as its innovative labor-management funds and skilled and productive workforce.

A second-generation laborer, Mr. Hellstrom has been a member of LIUNA since 1984 and a tireless advocate for the rights of workers for his entire construction career.

Prior to his appointment as vice president and Eastern Region Manager, he served as the business manager of the 17,000-member Mason Tenders District Council of Greater New York and Long Island (MTDC), whose affiliate locals serve the construction, asbestos and hazardous materials, recycling and sanitation industries as well as representing lay faculty at New York Catholic Schools.

During his tenure with the MTDC, Mr. Hellstrom helped create innovative, grassroots union organizing campaigns, like the multi-building trades union “Count Me In” movement, which fought to keep construction in midtown Manhattan 100 percent union. He also championed the creation of the “Laborers Fight Back” social justice advocacy organization that seeks to end the predatory practice of “body shops,” non-union contractors who exploit employment mandates for formerly incarcerated New Yorkers, essentially forcing them into low-wage, dangerous, dead-end construction jobs.

Giving a voice to the voiceless and fighting to improve the lives of unionized and non-union workers alike is a core tenant of Mr. Hellstrom’s 38-year union career and can be traced back to his earliest days with LIUNA as a rank-and-file member of, then, Laborers Local 37. As his experience and skills grew, so did his desire to help and support his fellow laborers.

In 1996, Mr. Hellstrom was one of 1,000 members who volunteered to participate in an innovative union organizing training offered by the then-newly formed Laborers Local 79. Recognizing his acumen, energy, and skill, Mr. Hellstrom was hired as one of the Local Union’s first full-time organizers. Over the next two years, Mr. Hellstrom would lead some of the most visible and successful organizing campaigns in Local 79 and Laborers’ history, including the famous campaign against Roy Kay, Inc.

In addition to his long union career, Mr. Hellstrom is also a Navy veteran, who served honorably in the Persian Gulf and Somalia from 1985 to 1989 aboard the USS Spiegel Grove.